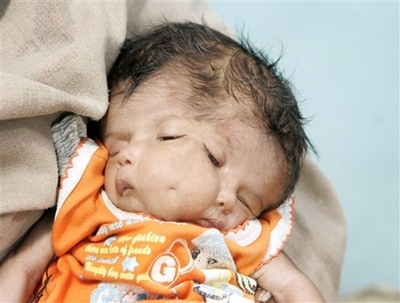 Mother Sushma holds her daughter Lali at their residence in Saini Sunpura, 50 kilometers (31 miles) east of New Delhi, India, Tuesday, April 8, 2008. The baby with two faces, two noses, two pairs of lips and two pairs of eyes was born on March 11 in a northern Indian village, where she is doing well and is being worshipped as the reincarnation of a Hindu goddess, her father said Tuesday. (AP Photo/Gurinder Osan)