I have seen the Hypertrichosis, Argyria, and Lymphatic Filariasis. Hypertrichosis is really a blanket medical term that refers to excessive body hair. Argyria is that the skinbecomes blue or bluish-grey colored. Lymphatic filariasis, also known as elephantiasis, is best known from dramatic photos of people with grossly enlarged or swollen arms and legs.

However, this boy from Bogota is suffering from a big mole on his back. Didier Montalvo, 6, born with the disease which is scientifically called Congenital Melanocytic Nevus and is harmful to his health.

Being believed in shamanic theory, the boy is believed to be created (fetus) during eclipse. They are also believed that the boy is being disturbed by supernatural spirit. The spirit could be the barrier for the boy to go to school and to be baptized.

However, concerned team of plastic surgery doctors from Britain, Neil Bulstrode, volunteered himself to help Montalvo for free. 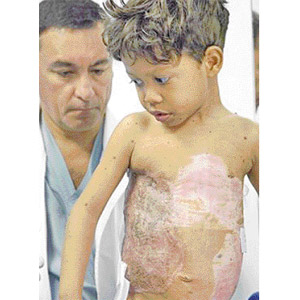