I laughed the moment I read the headline of this story. Well, it was quite rare to see this kind of situation whereby a cow made a visit to a McDonald. It sounds ironic because we have “Beef Burger” and then “Double Cheese Burger” and now the latest meal “TRIPLE CHEESE BURGER”. All these are using beef. And now, the cow made a visit to McDonald? Lol..

"Hello! One double cheeseburger and one medium coke, please."

What did the dairy cow order when she got to the drive-thru window at McDonalds? Nothing – she just wanted a little attention.

That’s what Sandy Winn says was the reason her cow, Darcy, wandered from her pen Friday and ended up at takeout window of the fast-food restaurant a half-mile away in Brush, Colorado.

Winn tells KUSA-TV that Darcy is a good cow until she’s bored – and then she goes looking for attention.

Winn says she didn’t know Darcy had escaped her pen until police called asking if the family owned a dairy cow. She says they told her it was “up at McDonalds,” so she fetched the cow and took her home.

They are tiny! They are cute! And, they are the smallest among their species. Oh yes, they are absolutely adorable because of their smaller sizes. There are many animals I found out that are small in size. Some of them are new to me. Now, I would like to share with you the smallest animals (not the kind of microorganisms).

The body weight of adults in the wild averages only 4 ounces! You can see from the picture above why they are often called “finger monkeys.” They are about 5 inches (13cm) tall, not including the tail. They inhabit the Amazon rain forest in Colombia, Ecuador, Bolivia, Peru and Brazil.

The world’s smallest snake, averaging just 10cm (4 inches) and as thin as a spaghetti noodle, has been discovered on the Caribbean island of Barbados. The snake, found beneath a rock in a tiny fragment of threatened forest, is thought to be at the very limit of how small a snake can evolve to be.

A puppy the size of a business card named Beyonce is hoping to gain the title of world’s smallest dog in the Guinness World Records. When she was one day old, Beyonce was so small, she could fit in a spoon. At two weeks, she’s almost as big as an iPhone,  The Grace Foundation of Northern California says. The tiny puppy didn’t have a heartbeat, either.

Males of the bee hummingbird living on Cuba and on Isla de la Juventud, weigh 1,6g, and their length is 5,7cm, Half of length make a tail and a beak. Females are a bit larger. They fly extremely fast – up to 80 km/h. They doing to 80 swings in a second. At rest the heart of the hummingbird usually work with frequency of 500 blows in a minute, and during physical activity of 1200 and more beats in a minute. The maximum life expectancy of the hummingbird is 8 years. They eat every ten minutes.

Scientists have discovered a fish living in forest swamps on the Indonesian island of Sumatra that is only 7.9mm long. The species of fish belongs to the carp family and is called Paedocypris progenetica . It is the world’s smallest vertebrate or backboned animal.

Animals can be very gentle and also very dangerous to human kind. Somehow, we often neglected the fact that they have brains. Their intelligence may caught certain people only and often we will say all animals are dumb because of their odd behaviors. Now, we have the opportunity to get to know which animal is the smartest and also the dumbest one. 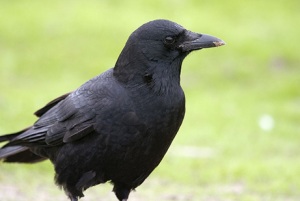 In experiments, the clever birds were observed using twigs and wires to snatch food from hard-to-reach places.

Using rocks to build homes in crevices along the ocean floor. The eight-legged eggheads also have a reputation for mischief, as one researcher learned when he captured one on video sneaking out in the middle of the night to feast on nearby fish, then returning to its tank as if nothing had ever happened.

Invent tools and transfer learned behaviors to others

“Washoe” surprised many scientists when she began to acquire sign language. Before her death , it is believed that she learned to use about 250 signs. “Kanzi” is another ape that has shown a prodigious knack for gab. The 27-year-old bonobo picked up language as an infant by watching scientists attempt unsuccessfully to teach his mother to communicate through keyboard symbols. Kanzi used the keyboard to ask researchers for matches and marshmallows. With the items in hand, he prepared a campfire and toasted the marshmallows on a stick. 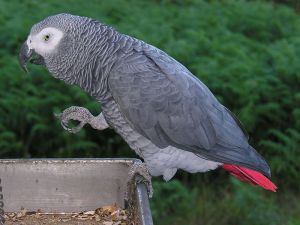 Ability to recognize and communicate the various qualities of an object

The prodigal parrot could name more than 50 objects and draw upon 150 words. Alex showcased his talents on TV programs such as Scientific American Frontiers, where he was presented with a piece of cloth and asked to describe what material it was made from. “Wool,” he would emphatically answer, after feeling the fabric with his beak.

Possessed a vocabulary of more than 200 words

To prove his uncanny ability, Rico underwent tests in which he was asked to retrieve toys by name. Not only did he get it right 37 out of 40 times, he also recalled the name of objects four weeks later. Investigators also found that Rico could pick up new words fairly quickly.

It’s hard to determine how dumb an animal is, because animals may show their intelligence in ways that we don’t recognize. Yet, we can still recognize their ability to do something useful. But to make something dumb, we have no right to judge them. It could be useful to them (animal) but looks odd in our eyes.

But if the size of an animal’s brain in relation to the size of its body is any sign of intelligence, then the stupidest animal that ever lived was probably the dinosaur called stegosaurus. This huge reptile weighed some 13,000 pounds, yet had a brain that weighed only about 21/2 ounces!

Your brain probably weighs more than 15 times as much as the brain of the huge stegosaurus.

Credits to: abcnews.go.com and bigsiteofamazingfacts.com

There are many new species has been found recently. But, I have listed few for you to watch. AWESOME!

They’re flat and can use their stout, armlike fins to shamble along the seafloor with a stilted gait, reminiscent of a walking bat.

It has a double penis, is as long as a tall human, and lives in a heavily populated area of the Philippines. Can lived up to 6.6-foot-long (2-meter-long) and 22-pound (10-kilogram).

jumping cockroaches were known from only the lat Jurassic Period. The newfound species has legs specially built for jumping, as well as sturdy antennae that help stabilize the insect as it leaps.

4. GLOW IN THE DARK MUSHROOM

Glowing nonstop in the Brazilian rain forest night, the newfound mushroom Mycena luxaeterna (pictured both in daylight, top, and in the dark) is something of a source of eternal light

A monkey sporting a ginger beard and matching fiery red tail. Looks like a cat and a leprechaun.

Credits to: National Geographic and Wired

Pets are just cute and lovely. But these people are looking for opposite taste in choosing their pets. Weird though! Well, here I present to you the pets: 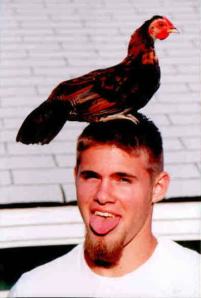 Might not be the weirdest pet of all time, but in western countries, raising cock as pet is quite rare. 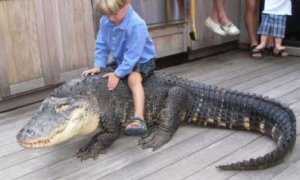 This is weird! A child befriends with an alligator or crocodile (correct me if I am wrong). WOW! What a dangerous animal on earth?! 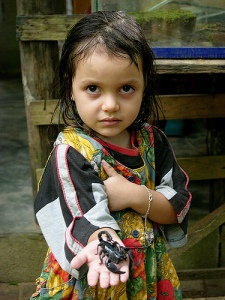 One of poisonous creature on earth. Well, maybe the poisonous sting has been removed. But, quite rare to me. 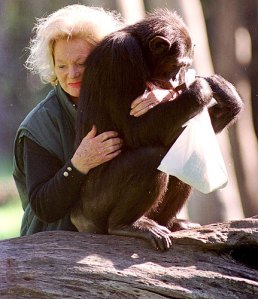 Quite rare though! Not many people can raise a chimp. Salute to this woman. 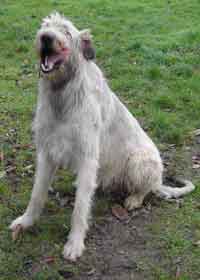 This is not a zoo nor safari! This is their home. A giraffe is their pet. WOW!

The first time I watch these photos, i was shocked. Are they real? Then I made some searches and found out that they are true. They are animals that we do not even know and watch lively, yet. Well, for those of you who have the same experience with me, I share with you the weirdness and freakishness of these animals surrounding us.

Its long, thick, strikingly corded white coat (the heaviest amount of fur in the canine world) resembles dreadlocks or a mop. 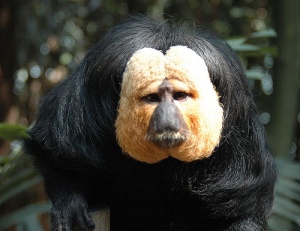 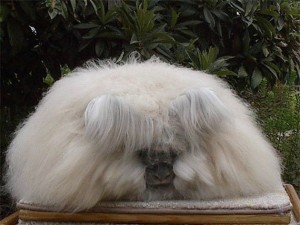 The Angora is one of the oldest types of domestic rabbit, originating in Ankara, Turkey, along with the Angora cat and Angora goat.

The Aye-aye (Daubentonia madagascariensis) is a strepsirrhine native to Madagascar that combines rodent-like teeth with a long, thin middle finger to fill the same ecological niche as a woodpecker. 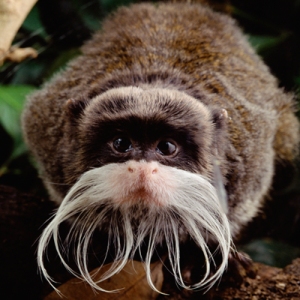 This tamarin lives in the southwest Amazon Basin, in east Peru, north Bolivia and in the west Brazilian states of Acre and Amazonas.

Hagfish are long, vermiform and can exude copious quantities of a sticky slime or mucus (from which the typical species Myxine glutinosa was named). 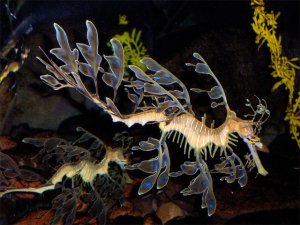 Named after the dragons of Chinese mythology, Leafy seadragons (Phycodurus eques) resemble a piece of drifting seaweed as they float in the seaweed-filled water. The Leafy seadragon, with green, orange and gold hues along its body, is covered with leaf-like appendages, making it remarkably camouflaged. 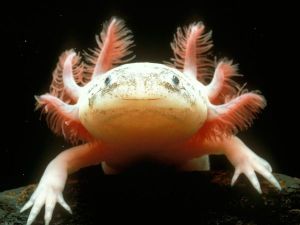 The species originates from the lake underlying Mexico City. Axolotls are used extensively in scientific research due to their ability to regenerate most body parts, ease of breeding, and large embryos.

The blobfish (Psychrolutes marcidus) is a fish that inhabits the deep waters off the coasts of Australia and Tasmania.

Tarsiers have enormous eyes and long feet. Their feet have extremely elongated tarsus bones, which is how they got their name. They are also known to prey on birds and snakes. 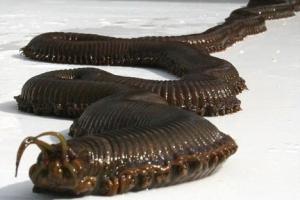 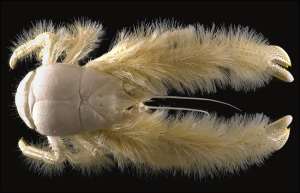 Kiwa hirsuta is a crustacean discovered in 2005 in the South Pacific Ocean. 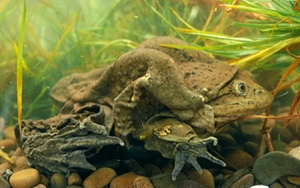 Deep in its azure waters Victorian naturalists found a rather curious looking frog, they marvelled at this new species poked at its flaps of skin and scratched their learned chins, there was only one name for this froggy fellow Telmatobius coleus – the aquatic scrotum.

In Brazilian rain forest, there is a type of fungi called Ophiocordyceps unilateralis. The special thing about this fungi is that it parasitic. Ants that come into contact with the fungus spores become infected, and within a week they begin behaving like zombies and leave the nest. The fungus species can infect an ant, take over its brain, and then kill the insect once it moves to a location ideal for the fungi to grow and spread their spores. The discovery was only on ants. What about other insects? Mammals? Human beings? Sounds scary though! 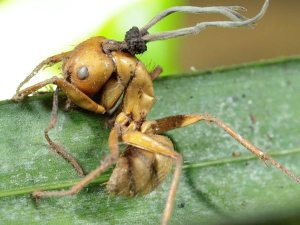 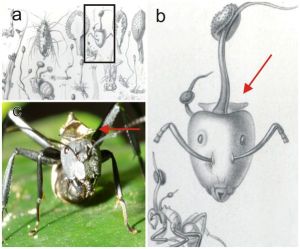 Credits to: National Geographic and Physorg

The gigantic-sized of the chimpanzee, discovered in the deep in the Congolose jungle. They are called “BILI”. According to the local people, the species is bigger, stronger, and fiercer than the normal chimpanzee.  Why? This type of gigantic-sized chimpanzee catch fish, kill lions, and even howl at the moon. WOW! That is scary. Some people believe that BILI is a hybrid of gorilla and chimpanzee. 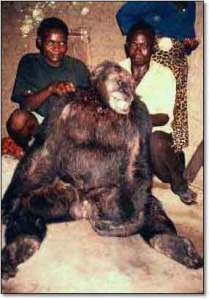 Compare with these chimpanzees!

The first encountered with this new species of cat was in 2006. The cat is called clouded leopard or “Sunda”. It was found in BORNEO. Just look at the difference between Sunda and normal leopard. It is very distinct and shocking. I myself became shocked and amazed by the skin. It is so attracting and rare. WOW!

It is different isn’t it? Well, compare with these leopards. The black one is obviously different in terms of its colour. But, Sunda is even more different. WOW! 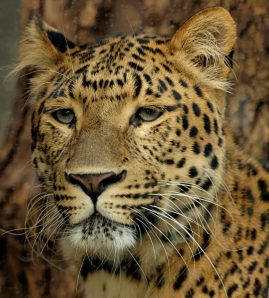 The new species of rat has been found in New Guinea, in the area Papua province of Indonesia. The “CAT-SIZED” rat is the biggest rat in the world. How about that? I believe that a cat would not dare to chase the rat.