It sounds like we’re in a movie or something. But, this is REAL!

Located within an extensive network of canals, south of Mexico City, the island La Isla de la Munecas (The Island of the Dolls) is a place of mystery and superstition. 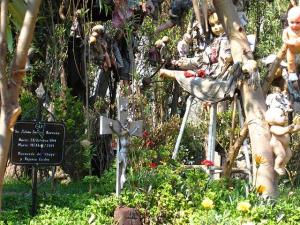 Hanging dolls on trees make the super creepy vision with the unblinking eyes gazing over you will make you feel constantly being watched. Even worst, some people claimed that they heard whispering sounds from the dolls.

Don Julian Santana took up permanent residence int he late 1950′. Local legend maintains that in the 1920s three young girls were playing on the island, only for one of them to drown, falling into the canal’s murky waters close to a small jetty. The nearby residents claimed that the dead girl’s spirit refused to pass on and remained tethered to the island. The area soon gained a degree of infamy and few dared to venture near the supposedly haunted land, especially at night. He used to say that he was haunted by the ghost of the little girl.